A Day at Keeneland Presented by Toyota 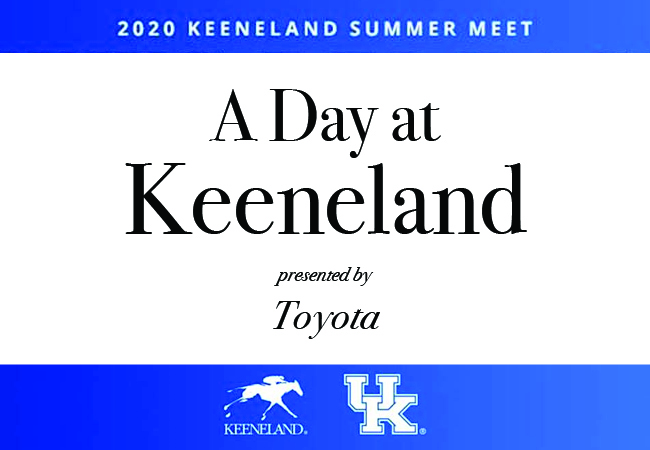 Keeneland and University of Kentucky Athletics have announced a new program to deliver Keeneland’s Summer Meet to the Big Blue Nation. On Saturday, July 11 from 2 p.m.-6 p.m. EST, the UK Sports Network in partnership with Keeneland will broadcast “A Day at Keeneland Presented by Toyota.” This four-hour broadcast will feature continuous coverage of Keeneland’s Saturday card that includes six graded stakes races and the Toyota Blue Grass Stakes (G2), which will award 170 points on the Road to the Kentucky Derby.

Host Tom Leach, “The Voice of the Wildcats” and an Eclipse Award winner who serves as a Keeneland racing analyst, will anchor the program live from Keeneland. Hear Keeneland announcer Kurt Becker’s call of each stakes and enjoy a variety of pre- and post-race coverage that will combine UK Athletics and Keeneland. The program will air on 630 WLAP in Central Kentucky, WLAP.com/listen and WLAP via the iHeartRadio app and also be streamed live on ukathletics.com and the UK Athletics app.

Among the other features will be:

Keeneland and UK fans can receive a preview of the racing action on Thursday, July 9 at 3 p.m. when Leach hosts a video interview with Coach Stoops and Shug McGaughey on BBN Live. Watch the interview on the Kentucky Wildcats Facebook or Twitter handles.

UK Athletics, a longtime partner of Keeneland, has engaged its family to celebrate the Keeneland Summer Meet. On Saturday, July 11, UK Athletics teams will follow Keeneland’s races on their respective social channels.

“We are excited about this new venture with UK Sports Network to showcase our biggest day of this unprecedented Summer Meet,” Keeneland President and CEO Bill Thomason said. “This radio broadcast enhances the Keeneland at Home experience for our fans who cannot join us at the track, and it celebrates the long connection between Keeneland and the UK Wildcats. We know Big Blue Nation eagerly anticipates the chance to hopefully enjoy more UK football-Keeneland racing doubleheaders this fall.”

“Keeneland is a signature Bluegrass tradition and a shared passion for both UK Athletics and the Big Blue Nation,” Athletics Director Mitch Barnhart said. “It’s an honor for us to share in that tradition and to participate in this one-of-a-kind Summer Meet.”

This unique programming is a further extension of the longtime partnership between UK Athletics and Keeneland to highlight the best of the Bluegrass. The program is part of the “Keeneland at Home” initiative with Keeneland delivering fans unique race-day experiences in new ways from the comfort and safety of their homes during these unique circumstances.

For more than 80 years, the Keeneland Association has devoted itself to the health and vibrancy of the Thoroughbred industry. The world’s largest Thoroughbred auction house, Keeneland conducts four sales a year, in January, April, September and November, and presents online auctions through the Keeneland Digital Sales Ring. Graduates of Keeneland sales dominate racing across the globe at every level. In April and October, Keeneland offers some of the highest caliber and richest Thoroughbred racing in the world. In 2020, The Summer Meet at Keeneland will present five days of racing from July 8-12. Keeneland hosted the Breeders’ Cup World Championships in 2015 and will hold the event again on Nov. 6-7. Uniquely structured, Keeneland is a privately held company with a not-for-profit mission that returns its earnings to the industry and the community in the form of higher purses and millions of dollars donated in support of horse industry initiatives and charitable contributions for education, research, and health and human services throughout Central Kentucky. Keeneland also maintains the Keeneland Library, a world-renowned public research institution with the mission of preserving information about the Thoroughbred industry. To learn more, visit Keeneland.com.

UK Athletics fields a 22-sport program that has emerged as one of the best in the country under Mitch Barnhart’s leadership. Coming off a 14th-place finish in 2018-19, UK has finished in the top 30 of national all-sports standings in eight straight seasons. Wildcat student-athletes are also achieving at unprecedented levels away from competition, reaching a 3.0 cumulative grade-point average in 16 straight semesters and serving thousands of hours in the community each year.

Toyota (NYSE:TM) has been a part of the cultural fabric in the U.S. and North America for more than 60 years, and is committed to advancing sustainable, next-generation mobility through our Toyota and Lexus brands. During that time, Toyota has created a tremendous value chain as our teams have contributed to world-class design, engineering, and assembly of more than 40 million cars and trucks in North America, where we have 14 manufacturing plants, 15 including our joint venture in Alabama (10 in the U.S.), and directly employ more than 47,000 people (over 36,000 in the U.S.). Our 1,800 North American dealerships (nearly 1,500 in the U.S.) sold nearly 2.8 million cars and trucks (nearly 2.4 million in the U.S.) in 2019.