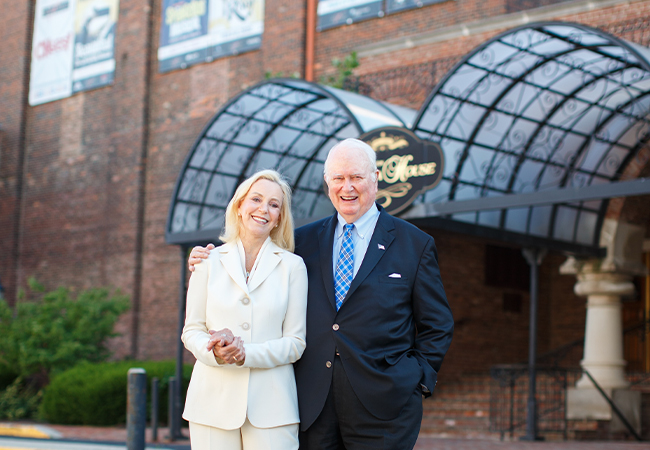 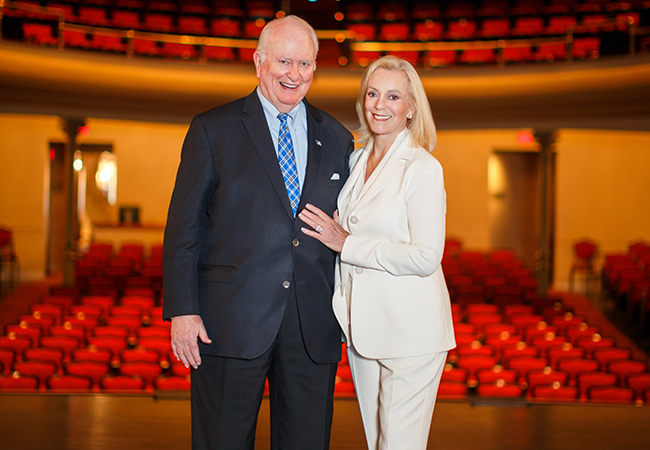 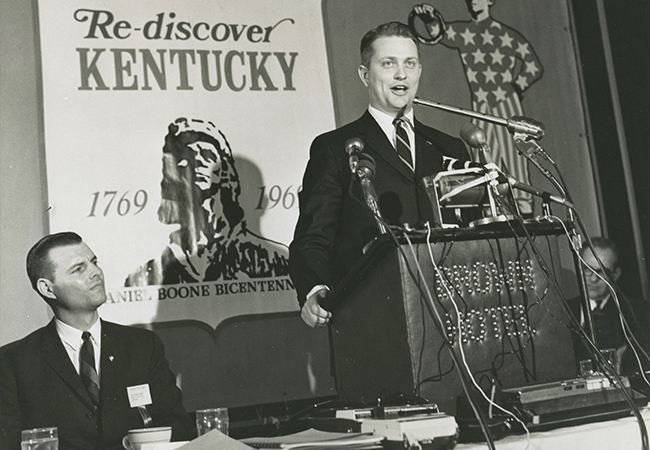 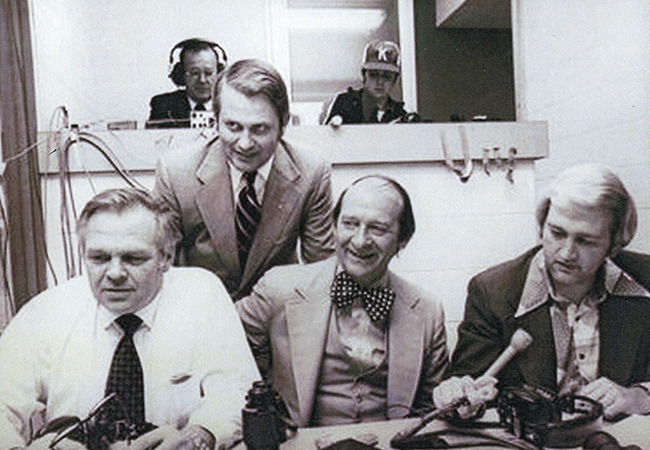 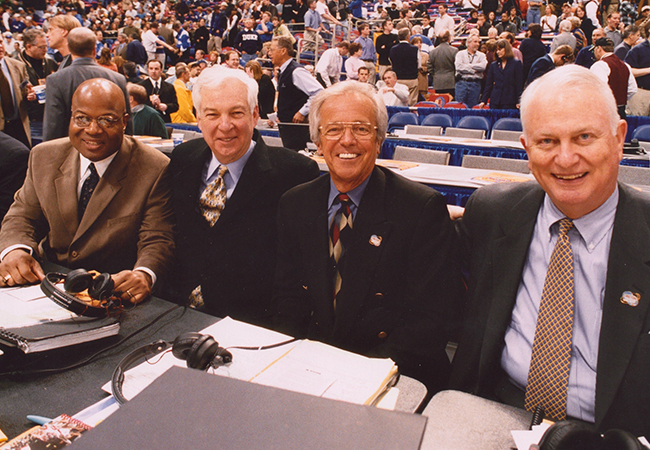 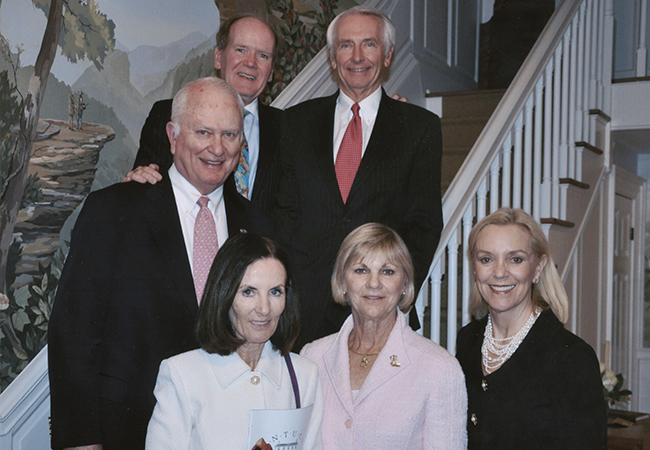 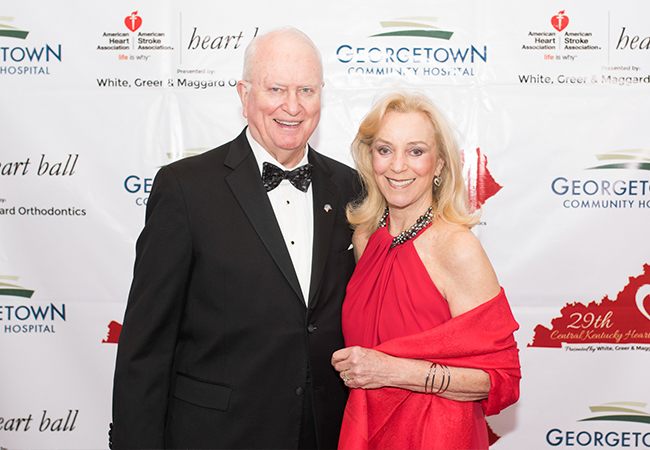 Jim and Pat Host have helped create a legacy in Lexington. Although stronger as a team, the Hosts had already accomplished a great deal in the Bluegrass before getting married in 1990. Pat was a Lexington native who moved away but returned in 1968, vowing to never leave again. After working at Jack Baugh’s Almahurst Farm she served as executive director of Action Auction, leading one of the first televised auctions in the nation to raise money for non-profit agencies. Pat and Action Auction’s volunteer chair Donna Moloney then formed an events planning and promotion company, Events Unlimited, which allowed them to engage in even more advocacy for philanthropic causes.

Imagine a Lexington with no Rupp Arena. No Central Bank Center, no Kentucky Horse Park, no revitalized Lexington Opera House. So many vital projects in our city could have languished without the champions they found in Jim and Pat Host.

Jim arrived at UK the fall of 1955 as one of the first two scholarship athletes for baseball. After four years at UK, Jim’s dream of becoming a big-league pitcher ended when he suffered a career-ending shoulder injury during his first minor-league season. He returned to Lexington to announce UK football and basketball games for the Kentucky Central Network and work as a DJ on WVLK along with future congressman Hal Rogers. Afterward, he moved into insurance and real-estate development. In 1968 Jim left these growing businesses behind when, at the age of 29, he agreed to serve as a cabinet head in Governor Louie Nunn’s administration as Commissioner of Public Information.

While in Frankfort, Jim served as chair of the National Republican Governors’ Conference held in Lexington, worked with then First Lady Beula Nunn to create the Kentucky Mansions Preservation Foundation to save historic landmarks like the Mary Todd Lincoln House, and convinced Governor Nunn to fund Kentucky Educational Television. Host and John Gaines also successfully initiated a plan to create the Kentucky Horse Park.

After a failed bid for Lieutenant Governor in 1972, Host had $107 to his name and owed more than $75,000 because he would not ask anyone for campaign donations. So Jim rented an apartment above Ray’s Barbershop on Walton Avenue and converted it into an office for his new business, Jim Host and Associates, even though he was the company’s only employee.

Within a matter of weeks, Lexington Mayor Foster Pettit and Fayette County Judge Executive Robert Stephens hired Host’s company to direct the Lexington Tourist and Convention Commission. Jim quickly learned that Lexington had a HUD urban-renewal grant that required the removal of old railroad tracks downtown along with the construction of a convention center and arena. However, no solid plans for the project had been developed. If the city failed to complete the initiative, it would owe more than $3.5 million to the Federal Government.

Host met the challenge by helping organize the Lexington Center Board with the Mayor and County Judge. Chaired by Jake Graves III, many key civic leaders joined the board to ensure the project’s success, including Garvice Kincaid, W.T. Young Sr., and Linda Carey. Host then pitched his proposal for a convention center, basketball arena, retail-shopping area, and high-end hotel on the site. However, Host’s revenue model to help pay for the development required UK to play its basketball games downtown. Dewitt Hisle, Host, and other board members then helped convince UK President Otis Singletary to move the Wildcat’s basketball games downtown by guaranteeing the same amount of income UK generated at Memorial Coliseum.  At the same time, more than 10,000 additional fans could attend games, bringing an enormous economic impact downtown.

The plan worked and the end result was Heritage Hall, Lexington Center Shops, Hyatt Regency, and Rupp Arena. Also included in the revitalization project was the renovation of the Lexington Opera House. As Linda Carey took the lead on the restoration initiative, W.T. Young Sr. initiated an endowment campaign, helping raise $2.5 million to secure the future of the Opera House. Now under the capable leadership of W.T. Young Jr., the Opera House Fund Board has distributed more than $12 million to support the arts while continuing to grow its original endowment.  Host and Linda Carey are the last two original Opera House Fund Board members still serving. As Linda Carey noted, “Jim has been an amazing cheerleader and organizer for the Opera House, always finding ways to promote and enhance its cultural significance.”

In the following years, Host Communications Inc. (HCI) became the nation’s leading collegiate sports marketing company, working with more than 30 big-time university sports programs and the NCAA. However, Jim always remained connected to Lexington. In 1979-80 Jim served as President of the Rotary Club. In 1983-84 he assumed the same role for the Lexington Chamber of Commerce. For him, leadership in civic organizations helped him learn how to better serve Lexington by “understanding the social fabric of the community.” At that time Host developed a relationship with P.G. Peeples, young president of the Lexington Urban League, making it HCI’s key civic focus.

Host’s efforts to develop a national company while remaining in local civic service created more opportunities for his hometown. Using his relationship with the NCAA, Host helped secure Lexington’s bid for the 1985 NCAA Final Four. That event spurred more downtown development of its own. Since then Lexington has hosted multiple NCAA tournament weekends, and the Central Bank Center has provided a venue for numerous concerts, conventions, tournaments, and other special events.

In 1989 Pat met with Jim for advice on her professional future and they briefly discussed opportunities at HCI. Always decisive, Jim asked Pat out and informed her, “I’m not going to hire you. I’m going to marry you.” One year later they wed and developed an amazing love story by working together in every facet of their life. Pat’s strategic planning and management experience created a new culture at HCI. As Jim noted, “Pat was the most important person at Host Communications even though she wasn’t on the payroll. She brought a level of grace and charm to both our business ventures and volunteer efforts.” Pat’s behind the scenes work added to the success of the enterprise as they developed life-long friendships because of her relational style. As HCI’s clients grew, so did the number of employees. At one time, Host Communications employed approximately 800 people nationally, more than 200 of whom worked in Lexington.

HCI’s success caught the eye of business entrepreneurs across the country, but the Hosts refused multiple opportunities to move the company out of state and expand the business. They simply did not want to uproot themselves from their hometown. Lexington certainly benefitted from their decision. As Commerce Lexington Inc. President and CEO Bob Quick noted, “Jim has always wanted Lexington to be the best it could be. There is no challenge too big for him. He is uniquely determined but extremely approachable. That’s why he accomplishes so much.”

After retiring from HCI, Governor Ernie Fletcher appointed Host to his cabinet as Secretary of Commerce. Almost forty years after serving as the youngest cabinet head in the Commonwealth’s history, Jim became one of Kentucky’s oldest cabinet executives. He and Pat began to see their efforts come full circle. During Nunn’s administration, Host had argued that the Kentucky Horse Park could play an important historic, cultural, and financial role by becoming a world-leading center for the equine industry.  During Fletcher’s administration, he began efforts to host the FEI World Equestrian Games, brining key stakeholders together to make it happen. In 2010 Lexington became the first host outside of Europe for the World Equestrian Games.

“Retirement” has not kept the Hosts sidelined.  Pat has been the recipient of two heart devices that have kept her alive since 1995. Naturally, she is passionate about using her skills to raise funds and awareness of heart disease. She helps organize the AHA’s annual fundraising ball and the Go Red for Women campaigns, but her impact is much greater. As Senior Social Events Director Mike Turner said, “She not only gives to the AHA cause, she advocates for the AHA mission. Pat is relentless in sharing our message of empowerment, making a huge impact in our work.” Jim and Pat were honored for their work at the 25th anniversary celebration of Lexington’s American Heart Association.

Jim concentrates his efforts on projects to help Kentuckians.  In 2018 he assisted P.G. Peeples and the Urban League with its 50th anniversary fundraising efforts to provide affordable housing in Lexington. As Jim says, “P.G. and his team do a remarkable job. I just help him connect with people who can help the Urban League achieve its goals.” Commenting on Jim’s work, Peeples added, “Jim is a long-time friend and a strong supporter of the Urban League’s mission. We would not be where we are today without him.” This year Host is focused on his role as member of the Town Branch Park Board of Directors, working to create an exceptional greenspace downtown.

Jim and Pat will tell you that in 30 years of marital bliss they have never had the first harsh word. As Pat summarized, “We are blessed beyond belief and very aware of the gift we have been given in finding one another and living in the heart of this extraordinary Commonwealth.”  Truly, Lexington has been the beneficiary of their combined talent and generosity. •

With a 210-year legacy in Lexington, the Lexington Opera House is a cornerstone of the city’s arts and entertainment scene. From ballet to opera, children’s production to comedy, there’s something for everyone on Short Street.

Driving down Broadway, you may have noticed the “Intermission” notice on their brand new marquee. With the governor’s recommendation that venues cancel large gatherings due to
COVID-19, the Lexington Opera House has had to reschedule or postpone much of its season thus far.

Tickets are still available for many shows through the remainder of their season, available for purchase online. The theatre is also available for rent for events, weddings and receptions. Learn more on their website.

The Opera House Fund is a non-for-profit 510 c(3) community service created in 1974. The Opera House Fund continues to support the venue through the presentation of professional touring artists on the Broadway Live and Variety Live series. To learn more, visit lexingtonoperahouse.com and click on “Support.”