Hip to Be Square 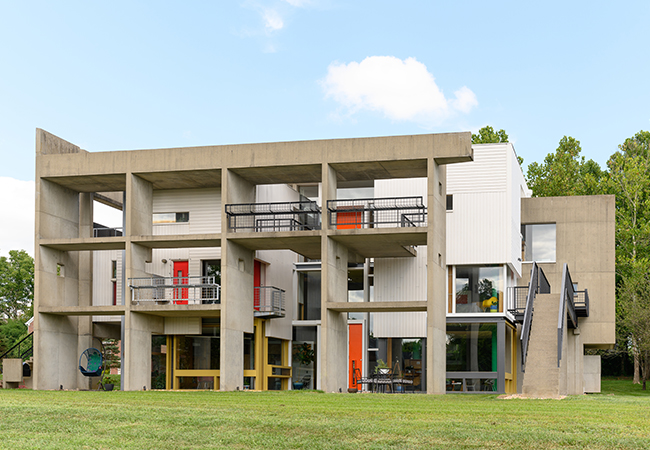 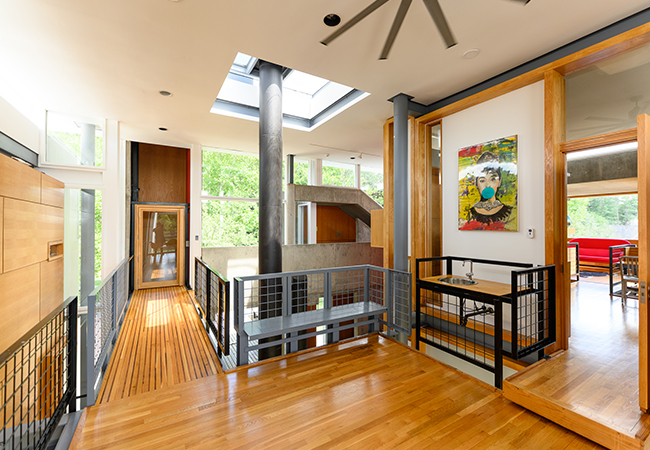 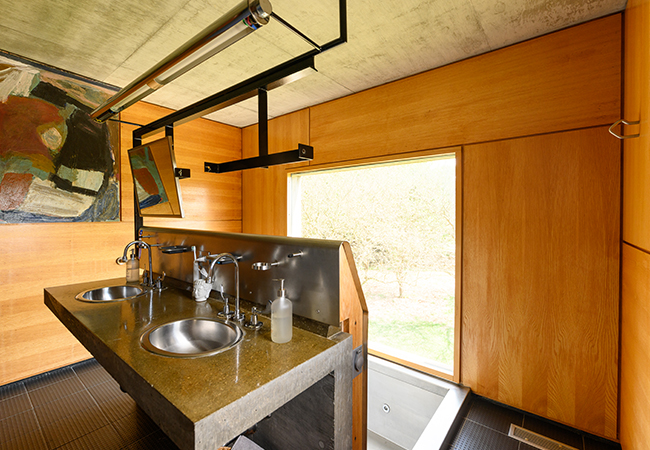 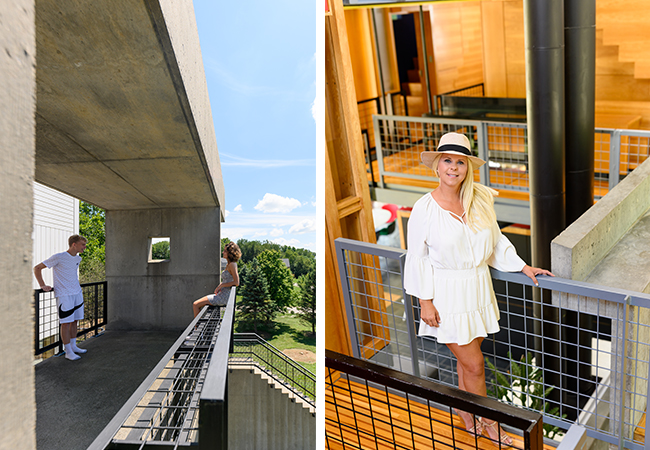 From any of its multitude of angles, The Miller House is a modern masterpiece.

Stepping through the bright green door of The Miller House feels a bit like falling down the rabbit hole into an architectural wonderland. Jennifer McClure, who has owned the home since 2018, recalls her initial impression, “I walked inside the living room and immediately knew what a truly amazing home this was. I just started twirling around in amazement and looking up at the most amazing design, and at craftsmanship that was out of this world. I couldn’t get enough – I was a kid in a candy store I ran from room to room taking it all in. I was trying to imagine all the thought, planning, time, attention to detail. I walked around and thought genius, absolute genius.”

This is exactly why the structure was included by Kenneth Frampton and David Larkin in their book American Masterworks: Houses of the Twentieth & Twenty-first Centuries.

The Miller House exemplifies the cubic tradition in architecture. The style, which emerged in the 1970s and gained popularity in the 1990s, uses a series of cube shapes to build houses with clean lines, mixed materials, and versatile living spaces. Concrete, glass, metal, and wood are seamlessly intermingled throughout the nearly 5,000 square foot home.

The structural façade of the three-story structure is primarily poured concrete, with white wood accents, in a series of connected cuboids. On every side, rectangular windows, in varied sizes, and balconies, with railings in a metal grid pattern, add visual interest. And, a cool catwalk leads to a second-floor entrance.

The interior, which can be accessed through several exterior doors, is open and airy, evoking a sense of calm, with a nod to fun. In perfect balance to the light wood that dominates the space, bright splashes of color in red, blue, yellow, green, and purple pop from walls. Additionally, metal railings, stainless steel appliances and tubs, and soaring pipe columns lend an industrial element.

The original owners desired a space that could accommodate both them, as a couple, and their adult children, giving each an autonomous area, while also allowing for ample family interaction. Thus, the home was created as a 9-square grid with a central gathering space surrounded by three self-contained living quarters, enabling the inhabitants to live both interdependently and independently. McClure, who resides there with her 15-year-old twins, explains, “The home was designed so everyone has a separate living area—your own private two-story apartment. You have a private entrance, bedroom, closets, private bathroom, living room and office, so even with the open floor plan you can still have your own private space.”

The open-concept of the great room allows for furniture to be arranged in a multitude of ways and makes for a perfect party pad. McClure says, “The house was designed to entertain; it's an amazing home for parties.” A poured concrete double-sided fireplace anchors the space.

Throughout, beautiful built-in elements abound, with an abundance of clever storage from large freestanding closets to custom cabinetry to cozy cubbies. Series of elaborate shelves, resembling mazes turned on their side, grace several of the walls, along with comfortable window seats.

The myriad of windows on each floor welcome light to pour in from all directions. As the day progresses, an interplay between sunlight and shadow offers an everchanging background of hues and moods. A set of windows in the master bedroom was placed at precise coordinates to showcase the phases of the moon. According to McClure,       “Each night I wake up to a beautifully framed moon shining on me.”

Completed in1991, the home was designed by architect Jose Oubrerie. Oubrerie was a protégé of Le Corbusier, pioneer of what is now referred to as modern architecture. According to Oubrerie’s  bio from the Austin E. Knowlton School of Architecture at Ohio State University, where he is a Professor Emeritus of Architecture, he and Le Corbusier collaborated on such famous projects as the Brazil Pavilion, Hotel d’Orsay, and the Strasbourg Convention Center. But, perhaps Oubrerie’s most celebrated structure is the Firminy Church, which was named the second most important structure built in the 21st century in the 2010 World Architecture Survey.

Obrerie and his wife still pay visits to the home and are two of McClure’s favorite guests. She states, “It is an honor to know them. I love to learn about the house, and I am so happy to have met them.”