All Rise: Remembering the legacy of RBG 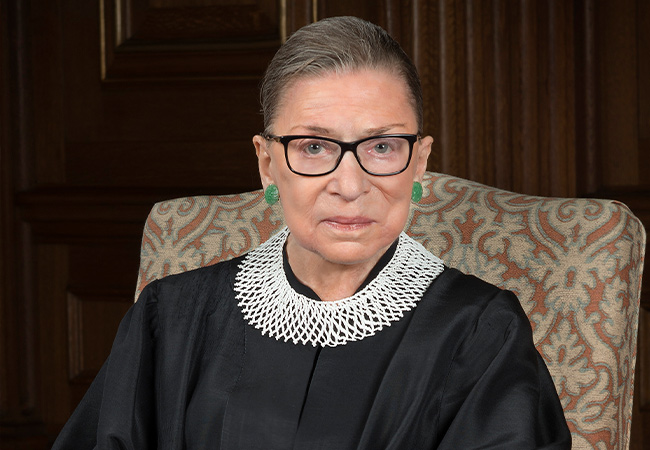 “Though she be but little, she is fierce.” - William Shakespeare

This quote from Shakespeare perfectly represents the icon who came to be known as the “Notorious RBG.” Being only the second female nominated to the Supreme Court of the United States, Ginsburg knew her presence was imminently important. She stated, “Women belong in all places where decisions are being made. It shouldn’t be that women are the exception.”

“I would like to be remembered as someone who used whatever talent she had to do her work to the very best of her ability.”

As a woman at the top of her male-dominated field, Ginsburg was accustomed to being in the extreme minority. In her class at Harvard Law, out of 500 students only 8 were women. With grace and grit, Ginsburg fearlessly forged the way. She was the first woman to be a member at the Harvard Law Review; to be hired with tenure at Columbia University School of Law; and to lie in state in the U.S. Capitol. She was also the first Supreme Court justice to officiate a same-sex wedding ceremony.

During her lifetime, Ginsburg garnered the Berggruen Prize for Philosophy & Culture and the National Constitution Center’s Liberty Medal for her tireless work toward social justice and equality. From 2004 through 2011, she was named as one of Forbes magazine’s 100 Most Powerful Women. But perhaps her greatest accomplishment was instilling the belief in young women that they too could instigate powerful change in the world without denying their sex.

In the words of Ginsburg, herself, “I would like to be remembered as someone who used whatever talent she had to do her work to the very best of her ability.” Here, three women from Lexington’s legal arena share how they will remember and honor Ruth Bader Ginsburg.

“On Wednesday, February 27, 2019, I was sworn-in, in open court to the United States Supreme Court. The courtroom is grand; draped in velvet, dark wood and marble. My name was read aloud in a space with the nation’s top jurists and they granted the motion for my admission.

“Ruth Bader Ginsburg was there. You could barely see her, the regal leather office chair almost swallowed her whole. Her hair was pulled back in her usual bun; she was quiet and reserved.

“She and I had a couple things in common; we are both from New York and lawyers. I often wonder what she thought of us young women lawyers, and whether she looked at us with pride and honor as we stood there before her with our right hand raised. From all accounts, I felt like she looked at us and thought, ‘There are still not enough women here.’ That day, I looked around and thought, ‘There are not enough black and brown women—and men—here.’

“In the name of equality, Ruth Bader Ginsburg dedicated her entire life to tearing down the barriers in the way of so many and yet, so many barriers remain. Her legacy lays at our feet… to pick up, carry on, and expand upon in a pursuit of actual equal justice for all.”

Christine Louise Stanley, a first-generation Haitian-American born in New York City, is president of the Bell Court Neighborhood Association; a board member for the Civil Justice Reform Commission; on the CivicLex Programmatic Board; and a member of the Lexington Junior League. She earned her JD from the University of Kentucky College of Law.

“Warrior, influential, ground-breaking, pioneer, wordsmith, notorious—all familiar words spoken in an effort to capture and reflect the legacy of Justice Ruth Bader Ginsburg. For me, I am grateful to Justice Ginsburg each morning when I have the privilege of stepping into my robe. A heavyweight in a petite frame, Justice Ginsburg blazed the trail for women in the law, but especially for women in the judiciary.

“Justice Ginsburg tackled bias, conquered barriers, and opened every single window and door available to her to light the way for us all. A fearless advocate for women’s rights, minority rights, voting rights and gender equality—for both women and men—Justice Ginsburg left an indelible mark. And she certainly left the world in a better place than she found it. Shouldn’t we all aspire to that?

“Particularly heartening for me was her close relationship with Justice Antonin Scalia. On opposite sides of most all issues, RBG and Justice Scalia enjoyed a lifelong friendship, even traveling the world and enjoying opera together.  In these often polarizing times, we need more examples of that civility, that acceptance and tolerance of one another. In the words of RBG, ‘You can disagree without being disagreeable.’”

“When Anita Hill outed Clarence Thomas for sexual harassment, I’d just graduated law school and begun working in a local prosecutor’s office. Many questioned Hill’s allegations, but I knew in my bones they were true. I’d been in her shoes, without any legal protection, without any option.

“A year and a half later, Ruth Bader Ginsburg took her seat as the second woman ever appointed to the U.S. Supreme Court and I knew just as profoundly that things would change. This woman led the ACLU’s Gender Equality and Women’s Rights campaign. This woman—as an advocate—argued the Supreme Court into recognizing that the Equal Protection Clause, which states ‘no state shall deny to any person the equal protection of the law,’ actually applies to women because women are indeed persons. As an advocate, she argued the Supreme Court into recognizing that men and women should be treated the same in work, in pay, and within society.

“As a justice on the Supreme Court of the land, I knew this 5’5” titan would do all she could to protect me, to protect all of us, in fact. Not just the women, not just the men. But all persons of every color, nationality, gender, age, and profession.”

Born and raised in Lexington, Pamela Perlman graduated with a J.D. from the University of Kentucky College of Law. She has served as a prosecutor, federal judicial law clerk, and most recently as a federal criminal defense practitioner for nearly two decades.

No fashion statement has ever spoken as clearly and with as much class as Ruth Bader Ginsburg’s iconic collar, which spoke to equality and cleverly voiced her opinion on Supreme Court rulings.

When Justice Ginsburg took her place on the court, she couldn’t help but notice how the judges robes were designed with men in mind, leaving room at the top for a necktie. So, in order to show that a woman did not have to sacrifice her femininity to hold a place of power, she adopted the lady-like touch of a jabot (a decorative tie often made of lace). She later transitioned into the more recognizable crocheted and embellished collars.

Ginsburg’s choice of collar often reflected how she felt about Supreme Court decisions, wearing different versions depending on whether she voted with the majority opinion or not. But, perhaps none is as celebrated as the black, bejeweled “dissent collar.” In a 2014 Yahoo interview with journalist Katie Couric, Ginsburg confirmed that the collar was her way of saying, “I dissent” to decisions such as the one made in the trial of Bush v. Gore, settling the 2000 election recount dispute. The now famous necklace was originally sold by Banana Republic.

Currently, the quintessential collar is so synonymous with the woman who wore it that Ruth Bader Ginsburg is often represented by the simple graphic of a white lace collar on a black background. Upon her passing, women across the world donned their versions of the collar to show their respect, admiration, and commitment to carrying on her legacy of equality for all.