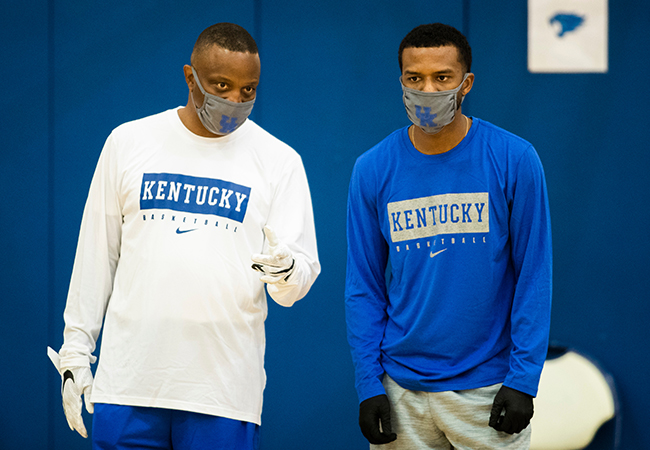 If Jai Lucas could have a do-over for his college basketball career, he would have played at Kentucky.

“I just wish [Coach] Tubby [Smith] had stayed and made it easier for me, because if he had stayed at Kentucky, I was coming to Kentucky,” said Lucas. “I am a basketball player, and this is a basketball school, and fans are crazy about basketball. This is the bluest of the blue blood [among college basketball programs].”

Smith left Kentucky to become head coach at Minnesota in 2007. Lucas eventually signed with Florida after Billy Gillispie was hired at Kentucky.

“I knew coach Gillispie. He had recruited me a little bit growing up [in Texas] for A&M,” Lucas said. “I just didn’t think I would fit how he played. He never liked or played smaller guards. That was a big thing for me, not coming to Kentucky.”

Given a second chance to come, he said yes when Calipari recently asked him to leave Texas to join his staff.

“If you’re about basketball and everything that comes with it—and the whole experience of college basketball—it’s hard to say no to Kentucky,” Lucas said.

His role will be a bit different under Calipari than it was at Texas, where he served as a full-time recruiter and on-court assistant coach.

“The biggest thing I will be doing is staying on top of recruiting and beating the bushes for the other assistant coaches to share what recruits are thinking. It’s going to be a more difficult year [due to COVID-19] where you cannot go out and evaluate recruits. I have to streamline stuff, stay really organized and look at the future and what recruiting might look like. Cal is big on looking ahead,” Lucas explained.

Calipari and John Lucas, Jai’s father, have known each other for years. The new UK assistant coach says his father told him Calipari will tell players and staff members the truth.

“He tells guys exactly what to do, but I had not seen how good a teacher he is until I got here. He is just able to explain why you are doing it, how to do it and what you are doing it for in a way guys understand,” Lucas said.

“There are no shortcuts. You have to put in the work to get where you want to go, and he makes sure players understand that. They all have achievable dreams, but it is up to them. They can mess it up if they don’t do the work.”

Lucas has settled into Lexington life easily. He says people have been nicer than he could ever have imagined.

“People who do not even know who I am are nice and helping me, especially sometimes when I get lost. The best part of being here has been the people, and that’s very exciting,” Lucas said.