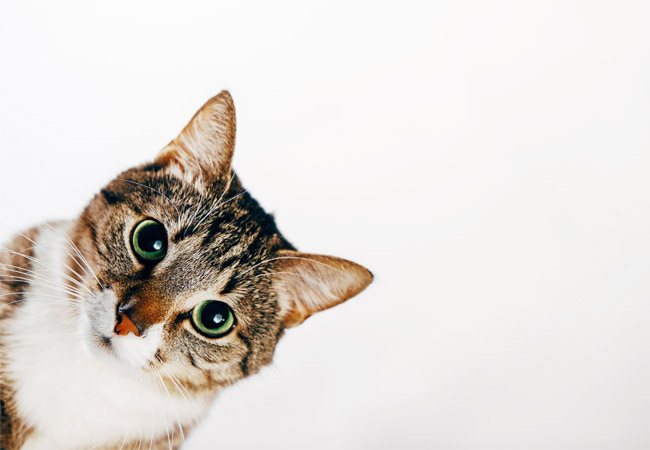 Cats are expressive creatures who use verbal and nonverbal language to communicate with their pet parents. Learning how to interpret your feline friend's behavior will reveal a lot about their cat ear emotions and the important role ears play in conveying information.

Just as cat tail language reveals what a cat is thinking and feeling, cat ears move with emotion, too. "Like a sophisticated satellite dish turning to pick up a signal, the cat's external ear, or pinna, rotates up to 180 degrees to locate and identify even the faintest of squeaks, peeps or rustling noises," said Animal Planet.

With close observation, you'll notice a pattern of various cat ear emotions revealed by even the subtlest gesture.

When a cat's just being a cat, their ears are facing forward in what's called the neutral position. Neutral ears indicate that a cat is feeling happy and relaxed and wants to chill out. When your cat's ears are in neutral, it's a great time to take advantage of their friendly mood, so now's the time to carefully pick up that cat and get your snuggles!

Straight Up and Forward

A cat will move its ears into this alert position when they want to pay closer attention to what's going on around them. Your cat wants to know, "What's that noise? Who's there? What's going on?" Sometimes, their ears are even facing different directions! Cats who are inclined to patrol their home exhibit this ear position and make great guard cats. In addition to "confident, curious cats," pointed out PAWS Chicago, "a cat who is hunting or playing will also keep [their] ears forward to collect as much auditory information as possible to execute a successful pounce." Are your cat's ears pointed up? Engage them in some fun.

A cat whose ears rotate with quick, sudden movements is a cat who is on a mission. As an extension to the "straight up and forward" move, a cat will move their ears back and forth (and shake their backside) when they're ready to execute the attack. This is another great opportunity to indulge your cat's hunting instincts, being sure to direct their attention to toys and not your feet. If your cat twitches frequently and paws at their ears, contact your veterinarian to rule out ear mites or other underlying health problems.

If your cat's ears are flattened against their head in "airplane mode" — as if they're about to take off in flight — it means that they're frightened or nervous, and it could lead to aggressive behavior. When a cat's ears are in this position, the cat is telling you that they're uncomfortable and need some space. Your cat may hide in their favorite spot until they're feeling more secure, so it's important to respect their bubble and their privacy.

Low and Facing Out

In this position, a cat may be signaling that they're not feeling well, said Best Friends Animal Society. Cats are experts at hiding an illness, but this ear position helps to identify if they're under the weather. If you suspect that your cat isn't feeling so hot, pay close attention to other possible signs of illness, including observation of their eyes and tail, and share your concerns with your veterinarian.

There is no doubt about which cat ear emotions are associated with this position. Basically, it translates to "step off" and is indicative of potential aggressive behavior to come, including biting or scratching. In multiple cat households, you may see this when cats are tussling. If it happens, keep an eye on the cats and discourage aggressive play. It's in the best interest of humans to walk away from a cat when their ears are in this position, or you could risk getting injured.

When it comes to understanding a cat's body language, the ears have it. Cat ears move with emotion and purpose, opening up the lines of communication between you and your furry friend.