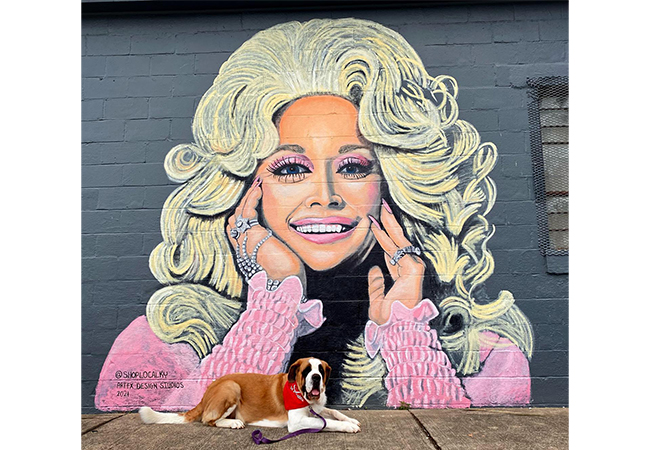 “Lincoln” by Eduardo Kobra
203-225 Water Street/Vine Street
The 60-foot-tall mural of Abraham Lincoln was painted in 2013 and mirrors the Lincoln Memorial. The bright colors (and massive size) made this a local landmark.

“A New Day Dawning” by Casey McKinney
201 Mechanic Street
In partnership with LexArts, this incredible art is made to represent recovery from substance abuse and awareness of mental health.

“Three Elements: Water, Earth, Air” by Key Detail and Yu-Baba 227 N. Limestone
As a part of the PRHBTN festival, the blues and greens of this mural make an incredible backdrop.

“Lily and the Silly Monkeys” by Herakut
156 Market Street (Belle’s Cocktail House)
This mural tells a story created by its two artists. A feature of the downtown bar scene since 2012, this mural is moody and enchanting.

“The Hive” by Melissa Newby-Armstrong
156 Deweese Street
This mural was done in 2016 in hopes to bring awareness to the declining honeybee population. With help of students and local artist Graham Allen, Newby- Armstrong was able to create this lively work.

Art With a Message:

“My Black is Beautiful” by Ciara LeRoy/Pretty Strange Design Short Street
This mural, sponsored and funded by LexPark, has an important message to share, including “

These four murals tell the story of Lexington and shows part of what makes this place great.

3D Boxes by Snub23 (pictured left)
National Avenue
These dimensional cubes wrap around the corner of the building, leaving lots of room for snapping selfies.

“Collette Miller Wings” by Colette Miller
867 S. Broadway (DV8 Kitchen)
The Global Angel Wings Project is to remind humanity that we are angels of this earth. This mural is designed to be interactive, and is actually made for taking selfies!

“Kentucky Icons Mural” by Joans Never
124 Malabu Drive
Many famous faces came out of Kentucky. This mural features some, including Loretta Lynn, Chris Stapleton, Tim Couch, Anthony Davis, and even George Clooney, holding a glass of Bourbon. Of course, there are horses, too!

“I Love You Kentucky”
Woodland Avenue/Shop Local KY Declare your love for our state!

“Together We Are Stronger” by SquarePegs Main Street
This inspiring message also happens to look great in selfies!

Many of the murals you see around town are in large part thanks to the efforts of PRHBTN (pronounced “prohibition”), an annual celebration of an artform that has long been criminalized, marginalized or under-appreciated.

“We live in downtown Lexington and seeing people take selfies and other photos of the murals is the coolest part of doing PRHBTN every year. We love seeing people engage and bring life to the murals we helped create,” said John Winters, Co-Founder of PRHBTN.

PRHBTN is funded entirely by the support of Lexington residents and businesses and each and every dollar of that support goes straight into the murals. The Kickstarter for this year’s PRHBTN is open and running until September 3rd and can be found at KickStartStreetArt.com. The festival will be held this October, and you will be able to see murals appear in real-time on our streets!