New and Noteworthy: Kentucky for Kentucky 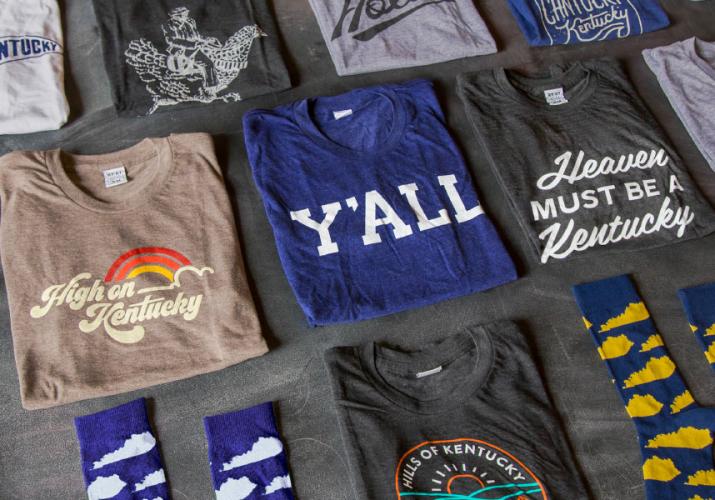 Until recently, as a resident of this fine state, there weren’t a lot of ways to show your love for our fabulous region. Sure, there are much appreciated organizations across the state doing their best to spread the word about our state, but it wasn’t until the wild and unorthodox Kentucky for Kentucky took tourism marketing and statewide branding just a little bit further that it really caught on.

Co-owner Griffin VanMeter said, “Kentucky for Kentucky started as a joke between myself and my friend, Whit Hiler, to crowd-fund a Super Bowl commercial to promote Kentucky. We were unsuccessful in getting the funding—the media buy was $3.5 million—but through our efforts, we were successful in getting people excited about the state.”

As the buzz was generating for Kentucky for Kentucky post-Super Bowl, VanMeter and Hiler decided it was time to change the slogan for the Commonwealth from the classic “Unbridled Spirit” to a little more progressive “Kentucky Kicks Ass”. The only issue: they didn’t have permission from the Commonwealth of Kentucky. Oops.

Make no mistake though, these guys knew exactly what they were doing. With their creative marketing and branding experience (VanMeter works at Bullhorn Creative and Hiler works at Cornett Advertising), the pair sent out a bunch of press releases to the media stating that they had been tasked with the job of rebranding the state, though nobody had actually hired them to do it. “We tasked ourselves,” VanMeter said. The team used guerrilla marketing and fun ideas, which generated a lot of buzz locally and beyond.

While the hype was high for Kentucky for Kentucky, Hiler and VanMeter capitalized on it by selling merchandise on their website, www.kyforky.com, with the “Kentucky Kicks Ass” slogan all over it. People loved it. And they wanted more.

After Kentucky for Kentucky’s popularity caught on like wildfire, the then-web-based business needed a place to print and store the company’s inventory of shirts, posters and other merchandise. An old thrift store on Bryan Avenue became available and though they didn’t need all of the square footage it provided at the time, they decided to move in anyway. From there, the decision was made to set up a retail store with the extra space. “There’s never been a plan. It has all been organic,” VanMeter said.

Kentucky for Kentucky now staffs ten employees, has a widely popular website and a brick-and-mortar store. A message on their website, in fact, sums up their mission perfectly:

Kentucky for Kentucky is a small company located in the heart of the Bluegrass region in Lexington. We are believers, promoters and producers for the great Commonwealth of Kentucky. We are obsessed with Kentucky, the real Kentucky. We’re all about highlighting the complex identity of our state and–with words, images and one-of-a-kind products–we want to spread the stories of this amazing place we call home. Kentucky has a lot to offer and even more to say. We’re showing the world why they should listen up.

Recently, the team also launched a brand called Southern Socks under the company banner, which now has nationwide distribution. You can find fun and funky socks with designs on them ranging from shotgun shells, to the word “Y’all”, to beer pong gear, to fried chicken buckets, to the outline of the state of Kentucky.

With Hiler and VanMeter’s connections to graphic designers at their marketing and branding agencies in town and across the state, the pair has created other unique Kentucky swag including apparel, Bourbon barware, homegoods, jewelry, prints and other gifts including a Kentucky-inspired Cards Against Humanity expansion pack. Say what?! You can order these goods on their website, purchase in store at 720 Bryan Avenue. Check out their extensive list of statewide retailers on their website, as well.

“We are surprised and grateful to everyone who has supported this cause. It’s gratifying. What’s even cooler though and the biggest surprise is when people say that they chose to go to the University of Kentucky because they saw one our videos. Or that they decided to move to Kentucky or back to the area because they saw what we are doing. We love hearing those tidbits and it’s really special to us,” VanMeter said.

VanMeter says the team hopes the company and the movement continues to grow through editorial content on their website and the organization’s involvement in events.“We basically just want to continue to kick ass.”