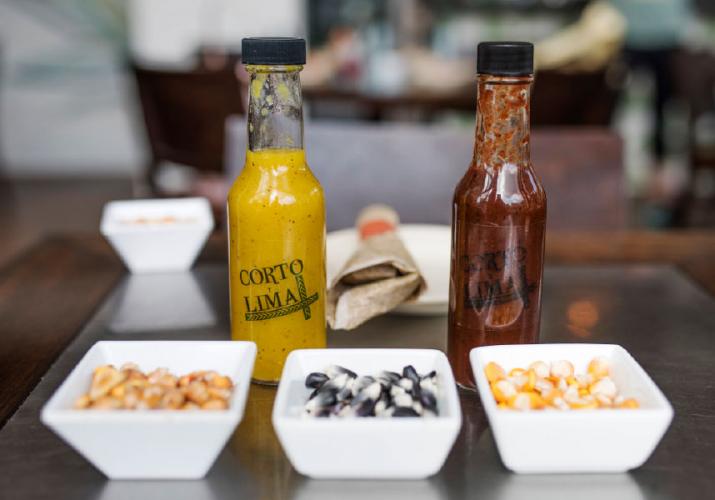 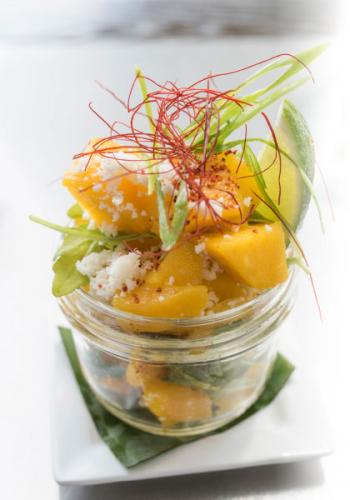 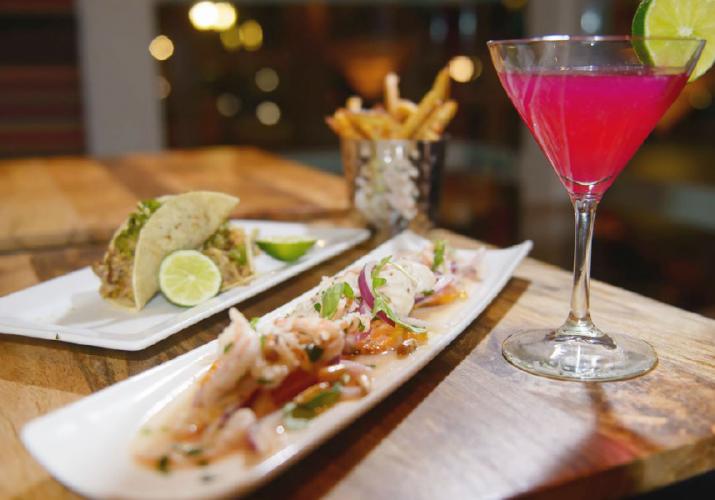 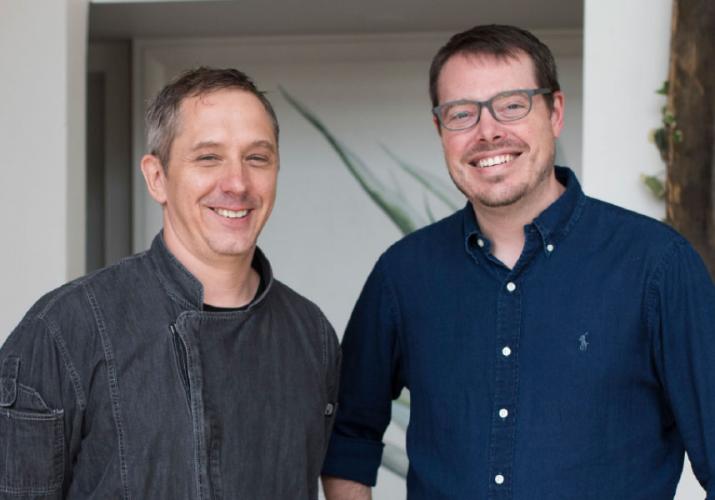 Corto Lima is located, as the Spanish name suggests, on the corner of Short and Limestone in downtown Lexington. While the modern, Latin-inspired spot is the first restaurant owners Jonathan Lundy and TJ Cox have opened together, it was a long time in the making.

The two met a decade ago when Lundy, who owned Jonathan at Gratz Park at the time, was also working as chef at Woodland Grill. Cox was working there as well, and the two developed an instant rapport. Both men had previously worked at Roy and Nadine’s at separate times (Lundy in the ‘90s and Cox in the mid-2000s). Though they never worked there together, it was at Roy and Nadine’s where they both learned the ropes of the restaurant business.
When Woodland Grill closed, Cox became more involved at Jonathan at Gratz Park and in 2011 was promoted to general manager. “It was during that time that we really started to develop a friendship and become confidants,” Cox remembers. He continues, “Communication is very important in a partnership, and sometimes being a good listener and understanding someone is hard. But we seemed to develop that pretty quickly, especially when we started to talk about the concept for Corto Lima.” They agree that Lundy brings artistic talent and people management to the business, and Cox, a former sommelier and the current director of operations at Corto Lima, brings 17 years of beverage and business operations experience.
During the last few years Jonathan at Gratz Park was open, Lundy took on a consultant role at Coba Cocina. When his restaurant closed in 2014 after 16 years in business, Lundy became Coba’s full-time chef. Cox was working at Coba as well, and the two began discussing the idea of opening a restaurant together. They credit Lee Greer, former co-owner of Coba Cocina and president of Greer Companies, for helping bring Corto Lima into existence. “[Coba] ran its course, and we did all we could do there,” Lundy explained. “What we learned there, and the financial backing from the Greer Companies is what really made Corto Lima possible. Lee [Greer] is a friend, a mentor, and in some ways we still consider him our boss. He’s always said that he wanted the two of us to open a place together. Without his help, this may not have happened.”

The building at 101 West Short Street was originally an antique store and a wig shop. In 2002, both spaces were combined and the building was renovated. Anna Belle’s was the first restaurant to occupy the space. Lundy explained that when Anna Belle’s was closing, the owner approached Lundy and his former wife and business partner Cara Drion and asked if they wanted to purchase the restaurant. “At first we thought, that’s crazy,” said Lundy. “But then we started thinking about it, and developed a concept called Maize. It was going to be American Southwest. We made an offer, but it was refused.”
In the years that followed, Lundy and Cox continued working in the industry and gaining experience. In the beginning of 2017, when they learned the space was available again, they made their move. “We were supposed to be here years ago, but I think the timing is right,” said Lundy.
The cornerstone of Corto Lima’s cuisine is their ground masa (corn flour), which is used to make their signature tacos and tamales. “We knew the idea would make Corto Lima special, but we had no prior experience in doing it,” said Cox. The meticulous 24-hour process involves the use of a special machine that was ordered from Mexico. “We had to break down the door to get it inside,” said Lundy. The masa arrives dry and has to be “willowed” (soaked in a lime solution to dissolve the outer shell) overnight. After an hour and 15 minutes of prep work, it has to sit for about 12 hours before it’s ready to be ground into flour by a massive lava stone. Lundy estimates that they make 25-50 pounds of tortillas or tamales by hand every day.
Other customer favorites include “Just Fried Chips”, which are fried to order and come with a variety of accompaniments like queso blanco, black bean dip, or their signature guacamole. “Our guac is a bestseller, and it’s a very simple recipe — avocado, roasted garlic, lime juice, cilantro, onions, and that’s it. It’s really fresh. We sprinkle coarse ground sea salt (smoked in house) just before serving it to give that crunch and depth of flavor,” said Cox. The pork filling used in their tamales is smoked using walnut barrel bungs from Maker’s Mark. Lundy uses a catch pan to collect fat and juices which are whipped into the masa, and he incorporates some of the smoked juice into the filling as well. “I tried to shed Southern [cuisine] to some degree, but that was one thing I couldn’t let go of,” he said.
Corto Lima’s drink menu, developed by Cox, focuses on tequila, mezcal, rum, pisco and cachaça, and of course, bourbon — “something very near to both of our hearts,” he said.
Their specialty cocktails feature fresh, simple ingredients that enhance the big flavors of the food. And unlike some craft cocktail bars, they aim to have the drink prepared quickly. “We do a lot of prep work so you’ll have your cocktail in about thirty seconds.”. Their house margarita consists of premium tequila, fresh squeezed lime juice and agave nectar. Other fresh ingredients they prepare daily include grapefruit shrub, prickly pear shrub, yerba buena syrup (fresh mint and rosemary processed into sugar syrup), charred fresh jalapeño for their mezcal margarita, and citrus and mint for garnishes.
When asked if they thought the building, which has housed Anna Belle’s Mia’s, Rosetta, The Jax, The Upstart Crow, and now Corto Lima, is “cursed”, Lundy laughed and said, “We’ve already un-cursed it. We did the sage, and we hung up a rosary and a horseshoe. I’m not religious or superstitious, but it was fun.” Cox added, “I think location is important for a restaurant, but really, having a sound operations system and having experience in hospitality — those are the things that will set us up for long term success. We’ve adhered to our systems and it’s working.”
They believe that one of the foundations of their success is offering something different. “Lexington did not need another Jonathan’s,” said Cox. “Southern food is being incorporated all over the world, and we made those dishes twenty years ago at Jonathan’s. Being an innovator is sometimes difficult, because you don’t always get all the accolades, but someone else is always adopting your style.”
Cox and Lundy knew they had to offer something different, but at the same time, while adhering to the current food trends like small plates, and fresh, local food. “We think that Corto Lima is an amalgamation of all those things,” said Cox, “and at the same time, it fulfills Jonathan’s prophecy of what he wanted to do years ago. The stars aligned — it was meant to be.”

Q&A with Jonathan Lundy and TJ Cox
Talk about each of your roles.
We are both owners and operators, but work in different areas. Jonathan is the chef and cooks every day. TJ wrote the business and beverage plans and specializes in business operations. Corto Lima is a team effort. The most important thing that we can do is put people in place and set them up for success.

Jonathan, what was your inspiration for Corto Lima’s menu?
Chef Boyardee was the first chef I’d ever heard of. But the food that got me interested in the industry was Southwestern cuisine. Tamales and tortillas were a couple of items that I was drawn to. Then I saw Dean Fearing, who’s from Ashland, Kentucky, in his role as one of the fathers of the mid-‘80s upscale southwestern food, and I was hooked. Other inspiration came from chefs such as Stephan Pyles and Mark Miller. As I got into it, I recognized that the flavor profile suited me. That interest in Southwestern food lead me to my first restaurant, Jonathan at Gratz Park. Nineteen years later, the love of that cuisine has lead me to Corto Lima.

Where is the food sourced from?
Our corn is from the Masienda company, which is sourced from Oaxaca, Mexico. It’s the backbone of the restaurant. Beyond that, we use a variety of purveyors and it all comes from different sources. We work hard to find the best ingredients to meet the variety of flavors and menu needs.

What have been the greatest challenges to date?
Totally immersing ourselves in this—meaning, putting our personal lives and families on hold as we opened.

What was your inspiration for the interior design?
Our interior design is by Cara Drion. The goal for the restaurant’s décor was to create an airy and comfortable space that utilized organic elements and the wonderful light that comes from the two walls of floor-to-ceiling windows. The warm white wall color is a backdrop for pops of colors from nature that reflect the colorful cuisine.

What food trends do you see emerging in the next few years?
We see smaller dining rooms, smaller plates and faster service. The days of the four-course, two-hour dinners are limited to smaller markets or special occasions. We’ve also noticed that diners want to visit multiple locations in an evening.

What do you think is lacking in Lex’s restaurant scene? What would you like to see in the future?
Lexington diners are going to decide what it is that they are looking for in their dining experiences from cuisine and dining scale perspectives. It is up to us as hospitality professionals to pay close attention to what the Lexington dining scene commands. When we find a meshing point between what diners are looking for and what compels us to serve, then at that moment, we know what to bring to the table.